Joanna Iwanicka's scenic design is attractive and well thought out, both in practical and thematic terms. The main part of the stage, backed by gray cinderblock, is also framed by two stark, gray support posts that imply both a framed shot and the thresholds Steve cannot cross, literally and metaphorically, in the course of his incarceration.

This theme is underscored by minute attention to detail: The chairs accommodating the other seven actors in the cast are plain black with open backs that also read as empty frames. The crates from which they retrieve their costume pieces as they shift between roles also mirror the themes of boundedness and confinement.
In the last moments of the play, Iwanicka literally breaks the frame, splitting the expanse of gray in two, pushing the wall of Steve's room at home to the fore, allowing the audience a feeling of tentative relief as he assembles a collage of shots bursting with color.
Monster | reviewed by Christine Malcom | Edge Media Network

As for Joanna Iwanicka’s green tiled locker room set, it is so perfect you can almost smell the chlorine, and the bleach used by a janitor (Ric Walker) to mop a telltale floor.
Dry Land | reviewed by Hedy Weiss | Chicago Sun Times

Strawdog knows their performance space front to back and still utilizes it in clever new ways in Sweeter. Scenic Design by Joanna Iwanicka is a revelation. An amazing early 1970’s palate opens a world of opportunity to explore color, pattern and lighting (design by Jordan Kardasz) and Sweeter does just that.
The Sweeter Option | reviewed by Kaitlyn Kearn | Chicago Stage Standard


(...) Joanna Iwanicka's morphing set (is) a technical feast, and a continuation of Strawdog's tradition of imaginatively telling sweeping stories in a small space.
The Sweeter Option | reviewed by Dan Jakes | TimeOut Chicago 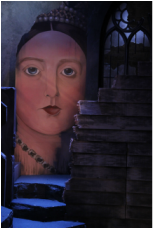 The technical aspects of this production really stood out as a big win for Lifeline Theater. When you walk into the theater you will first see a very strange, very exciting location for this play to be set. Scenic designer Joanna Iwanicka has created a tiny piece of this magical world that honestly.. I wanted to play on.
Monstrous Regiment | reviewed by Justin Allan Kimball |  Showbiz Chicago

I loved the scenic design. In a little post-stamp size storefront theater scenic designer Joanna Iwanicka has outdone herself.
The President | reviewed by Jonathan Abarbanel | Dueling Critics
The sound effects (by Steve Labedz) on Joanna Iwanicka’s impressive set add depth and the proper atmosphere to the production.
The President | reviewed by Tom Williams | Chicago Critic

The set for this production is top notch. It resembles a hyper-real game show set with lights flashing and beautifully painted props.
The True Story of the 3 Little Pigs | Reviewed by Scotty Zacher | Chicago Theater Beat

Joanna Iwanicka’s movable set is an elegant marvel (...)
Of course this being Dickens, there also is great humor (including a couple of rollicking visits to the theater) and adventure (as bookcases are transformed into a row boat) and work (the blacksmith’s forge), all imaginatively conjured.
The Great Expectations | Reviewed by Hedy Weiss | Chicago Sun Times

The moon is a central figure in the stories and lives of Natalia and Abimbola. (...) The alley staging by Joanna Iwanicka makes this clear as waxing and waning moons connect the two rooms (her nursery and his hospital room, where he is recovering from the accident that welds the characters’ lives together) over the chasm of the stage floor. The two rooms on platforms are realistically decorated, while a few set pieces effectively convey the other locations on ground level. Elements of the cab in the opening scene, a checkerboard pattern on the edge of the wooden table and the sign telling passengers not to curse, remind the viewer of how quickly lives can be transformed. At times, the need for shifting focus from one end of the stage to the other can be distracting, but the setting effectively conveys the alternating moods and locations of the play, and mirrors the transformations that the characters undergo. Iwanicka’s props also set the scene and help define the characters (..)

The real star of the show is the puppetry and props created by Joanna Iwanicka. During one sequence, Goodrich maneuvers a puffer fish constructed from a purple umbrella that is mesmerizing to watch. When Harold takes off on a rocket, Frankel extends a long pole into the crowd with a tiny, illuminated rocket attached. A five-year-old seated next to me exclaimed: "This is so awesome!"

(...) the most exciting element of this production is how Harold’s drawings come to life. Liviu Pasare’s superbly executed high tech animation and video design is nothing short of magical. His work is matched by the creativity behind Joanna Iwanicka’s inventive, innovative oversized props and puppets paired with Alison Siple’s beautifully imagined costumes all displayed against Geoffrey Curley’s stark white palate of movable set pieces.

Thanks to the animated projections of Liviu Pasare and the delightfully quirky puppets of Joanna Iwanicka, Harold’s world quickly becomes a lively wonderland. With the exception of those marvelous projections, the stage-craft is decidedly low-tech, which is totally in keeping with the book’s sensibility. Puffer fish are umbrellas in disguise, a full moon doubles as a pie plate flying saucer, a displaced sheet turns Harold’s bed into a sailing ship.

Directed by Karen Kessler on a wonderful set (Joanna Iwanicka, who also assembled some great props), this is a slick production with a solid cast of performers, each actress bringing something special to the characters penned by McGravie.

"WRENS" by Alan Bresloff | Around the Town Chicago